A single candlestick chart pattern, consisting of one small-bodied candle with short or no tail (shadow) on one side and a long tail on another side.

A regular Hammer is the one with the long bottom tail (the candle shape looks like a hammer.)

An Inverted Hammer, just the opposite, has the long tail on top.

Both regular and Inverted Hammer occurs in a downtrend. It is important because there are two other identical-looking single candlestick chart patterns that occur in an uptrend:

Even though a prior downward price trend is essential for a candle to be a Hammer or an Inverted Hammer, the candle itself can be either bullish or bearish. 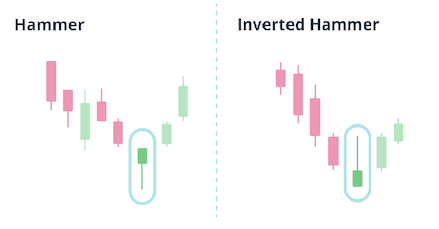 Hammer and Inverted Hammer signal a potential defeat of sellers and bottom out of a downward trend. A reversal should be confirmed by the following bullish candle.

A Hammer’s short body and a long lower tail show that sellers were strong in the market during the period. Yet, their efforts were all absorbed by the buyers, who managed to bring the close price near the level it has opened.

An Inverted Hammer’s short body and a long upper tail show that the buyers were making a real effort to push the price up during the period. But the sellers did not let them, and the candle closed at the price near its open.

In both cases, sellers could not take the price lower, i.e. whoever wanted to sell - already did. Hence, buyers were left to dominate in the market and will likely push the price up. 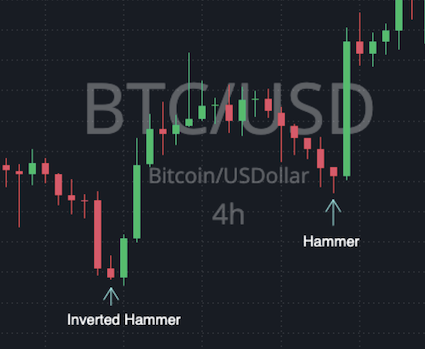