Both Hanging Man and Shooting Star represent a single candlestick chart pattern, consisting of one small-bodied candle with a short tail or no tail (shadow) on one side and a long tail on the other.

The tail is typically at least two times larger than the real body of the candle.

A Handing Man is a candle one with a long bottom tail.

A Shooting Star is a candle with a long tail on top.

Both Hanging Man and Shooting Star occur in an uptrend. A prior uptrend is what distinguishes them from the identical-looking Hammer and Inverted Hammer:

Picturing an image of a “Hanging Man” and a “Shooting Star” as something that occurs above your head, you can remember that both patterns follow an uptrend.

Both of them can be either bullish or bearish. 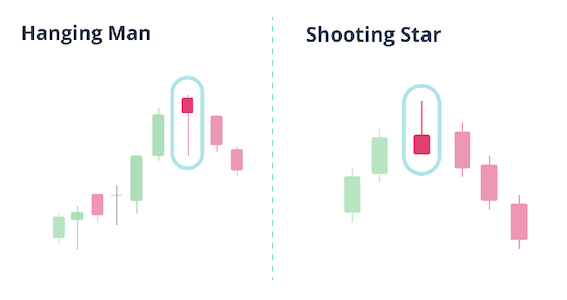 Hanging Man and Shooting Star indicate that buyers are losing their strength to sellers, who are likely to take over and reverse the trend downwards. The reversal needs to be confirmed by the following bearish candle.

As a Hanging Man forms in an uptrend, its short body and a long bottom tail show the growing selling interest in the market. The buyers were trying to maintain the rising trend, but they could not counter a major sell-off, and their power was only enough to close the candle near the price level it opened.

A Shooting Star’s short body and a long upper tail show that the buyers made a strong push for the price to keep going up. But the sellers did not let them, and the candle closed at the price near its open.

With both candles occurring in an uptrend, they show that the buyers are losing their grip and whoever wanted to buy - already did. Therefore, sellers were left to rule the market, and they are likely to push the price down.