Construction of Bullish Abandoned Baby is quite similar to the Morning Doji Star. The main difference is that the doji candle in the middle gaps below the tails of the first and the third candles.

The Bearish Abandoned Baby is also almost the same as the Evening Star but the doji in the middle gaps above the tails of the first and the third candles. 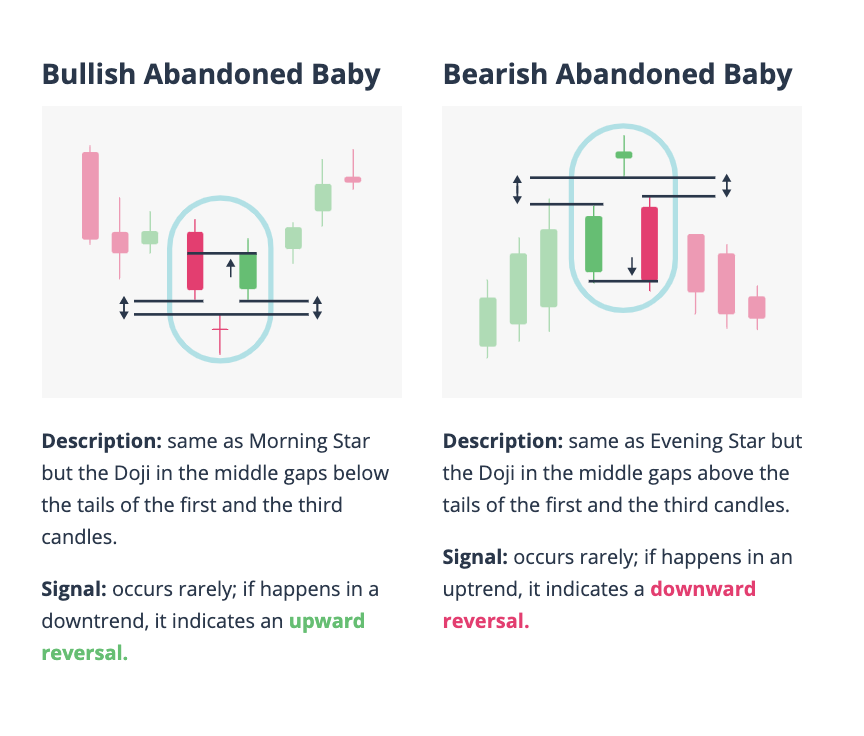 It’s easy to remember how the patterns look from their name. A doji in the middle with gaps on both sides resembles a baby (tiny candle), abandoned by two parents (full-bodied candles).

The idea behind the Bullish Abandoned Baby pattern is that the price has been dropping aggressively during a downtrend and just had a big sell-off (first down candle). This leads to increased selling pressure and price makes a negative gap.

However, after such powerful bearish moves, sellers may be exhausted, and the price forms a doji, when open and close prices are nearly the same. Doji’s appearance may indicate that sellers are losing momentum and buyers are starting to step in. The doji is followed by a strong bullish candle that typically gaps higher from the doji. This shows that buyers have regained control. The expectation is that the price will continue to move higher as the pattern shows that selling has been at least temporarily exhausted.

Сonversely, Bearish Abandoned Baby occurs during an uptrend and includes a big bullish candle as the first candle which drives the price up. After that, the price makes a positive gap and forms a doji which shows the moment of indecision on the market. Sellers get the control back and a long bearish candle appears which can be a start for a downtrend.