In general, a wedge is a period of market consolidation between two sloping support and resistance lines which converge eventually. This convergence means that the magnitude of the price movement is slowing down. The lines show that the highs and the lows are either rising or falling, but the pace at which the two types of extremes are formed differs.

There are two types of the wedge pattern — the Rising Wedge and the Falling Wedge, and they are opposite to each other.

The Falling Wedge pattern shows a consolidation with lower highs and lower lows (downward sloping) that converges towards a single point.

The Rising Wedge pattern represents a consolidation with higher highs and higher lows (upward sloping) that converges towards a single point.

Wedges can be both trend reversal and continuation patterns.

The Falling Wedge pattern indicates the upcoming breakout higher the resistance line, regardless of the price action before the pattern. If it occurs after a downtrend, it is usually a bullish price reversal pattern. But if it forms after an uptrend, then it can be a continuation signal.

Taking into account that wedges are both trend reversal and continuation patterns, there must be an established trend before pattern formation. The wedges indicate a pause in the current trend or period of indecision.

To form a Wedge pattern, the upper line requires two or three highs that touch the line and should be higher or lower than the previous one. The same applies to the lower line and lows.

Basically, it forms when the price volatility slows down and traders’ activity becomes sluggish. This leads to the volume decrease while the price progresses through the pattern. But then a breakout from one of the trend lines happens with a significant volume increase and the period of indecision should be ended.

The Falling Wedge pattern forms when the decline in prices slows down and a trading range narrows. Prices continue to slightly update local minimums but at the same time seem to be incapable of further decline. This gradually increases buyers' pressure. With significant volume, buyers can take the price away from the pattern body. 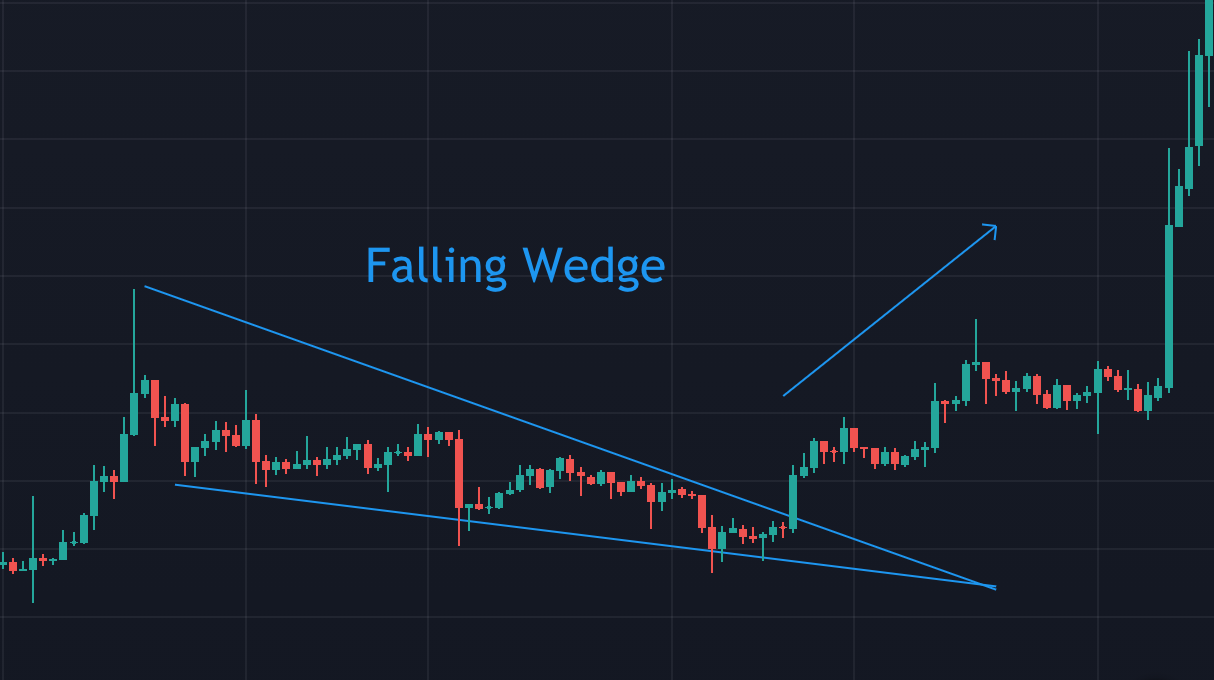 The Rising Wedge pattern occurs when price increases in a narrowing range. But with volume decrease, it seems that the price is unable to go higher even after minor updates of local maximums. Sellers start to increase the pressure and after breaking out the support line they regain control over the market.