Pennant is a continuation pattern formed after a large price movement that is also known as a flagpole. After the flagpole, there is a consolidation period with converging trend lines that form the pennant. The pennant is followed by a breakout in the same direction as the initial large movement.

The pennant usually looks like a small symmetrical triangle consisting of two strong price moves. It means that the pennant pattern is a kind of a pause for buyers and sellers before taking the asset further in the same direction. Depending on the price direction, pennants can be bullish and bearish.

The Bullish Pennant pattern begins with a large upward price movement (a flagpole), followed by a consolidation period and breakout higher in the end.

Conversely, the Bearish Pennant pattern is represented by a sharp downward movement, followed by a price consolidation and breakout lower.

A lot of chart pattern signals that the next move after breakout should be approximately the same size as the height of the formation. But it’s not for pennants.

Usually, the pennant signals that the next move after the period of consolidation may be as big as the flagpole, which precedes the pattern. The direction of the price movement after a breakout is also the same as flagpole’s.

The Bullish Pennant pattern signals that after a relatively short period of consolidation, there should have been a breakout upward to continue the established uptrend.

The Bearish Pennant pattern is opposite to the bullish one, so it indicates the following breakdown lower and continuation of the downtrend.

Considering that the pennant pattern represents a break between strong price movements, it is known as a short-term pattern, so it shouldn’t last long. However, the pattern can be formed over any timeframe.

The volume is one of the most important indicators during all the pennant pattern formation. To make a flagpole, there should be a large volume and strong pressure on the market. After that, the volume declines because buyers or sellers can be exhausted after strong price movements and it leads to price consolidation. At the same time, large price movements attract a lot of new traders which increase the volume and drive the market price in the same direction as before the pattern formation. 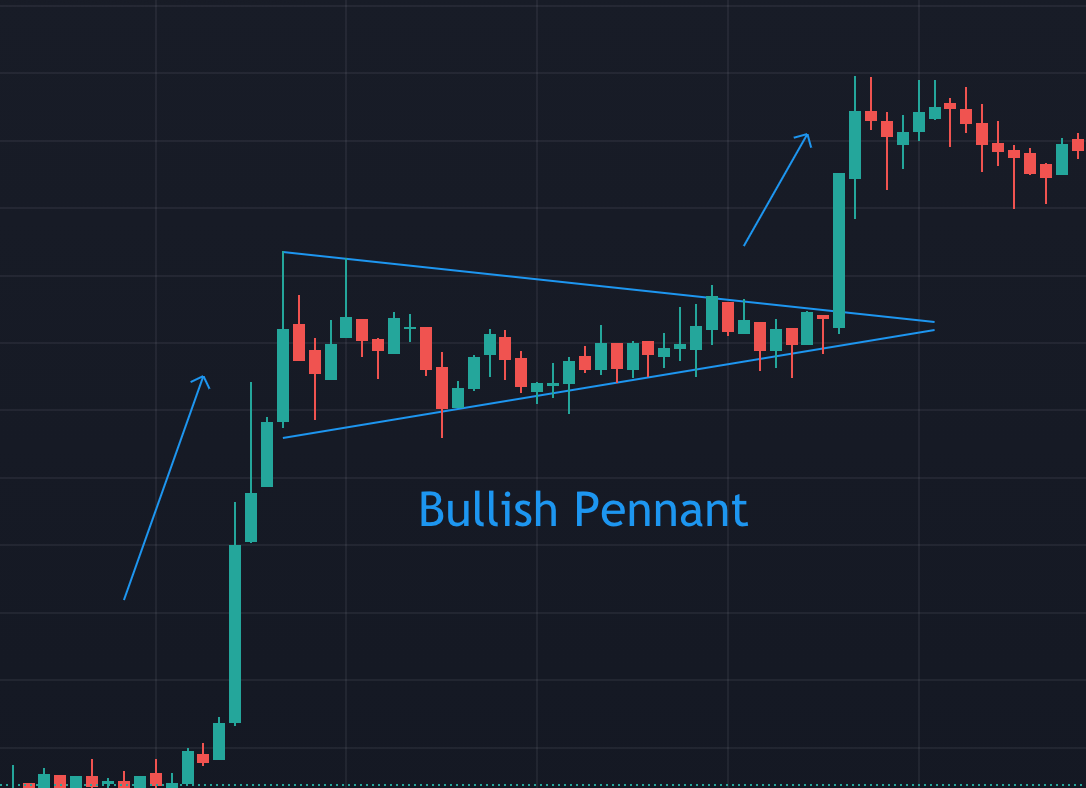 In the Bearish Pennant pattern, sellers rule the market and make an initial flagpole, pushing the price down. Some of them use the chance to take profit and some just enter the market to benefit from further price movement. Buyers try to push the price back but it’s not enough and the price consolidates. Without enough bullish sentiment, the market turns bearish once more.

It’s important to clearly distinguish pennants from triangles and wedges. Unlike pennants, these formations are long-term and do not have a flagpole.