Diamond chart formations are generally uncommon. But when they do occur, they can be a strong indicator of a trend reversal. There are two types of diamonds, depending on where it is formed — Diamond Top and Diamond Bottom.

Diamond Bottom is formed the same as a Diamond Top but after a downtrend.

The ideal structure of the Diamond pattern is a symmetrical rhombus. But in real market conditions, it is usually stretched, shifted, and tilted. It may also look like a combination of two triangles that are not always symmetrical. 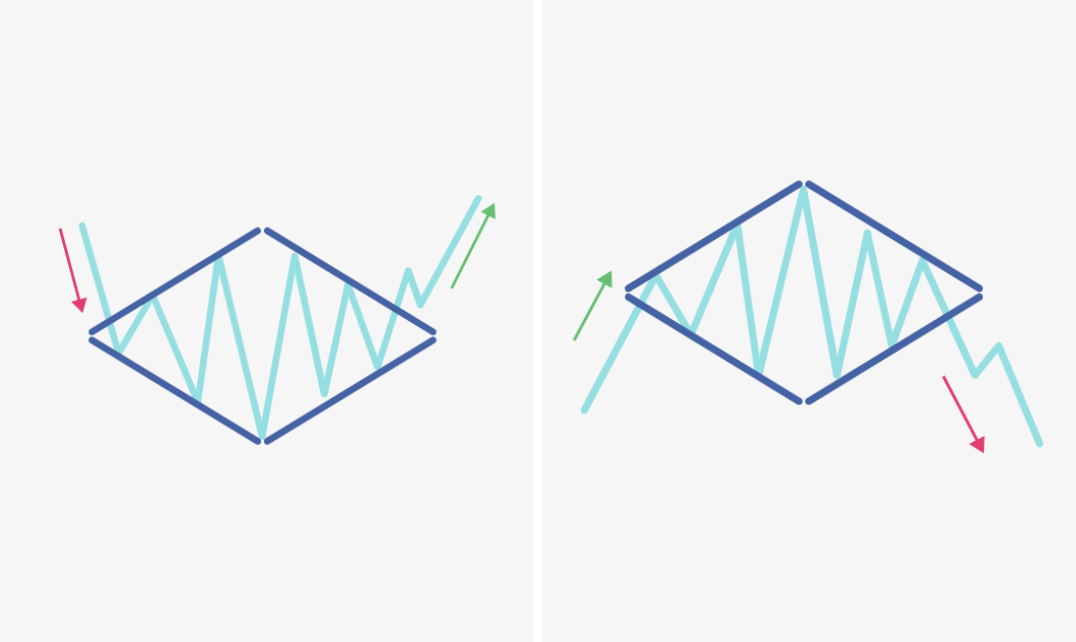 Diamond is a long-term chart pattern that may take a few weeks or months to be formed. Diamond can occur on any timeframe, but it is more relevant for H4 and higher. If a pattern is formed on smaller time frames, it may continue the established trend. In most cases, Diamond formation on higher time frames indicates price reversal.

It means the Diamond Top pattern can signal reversal downwards, while Diamond Bottom hints that price should move upwards after pattern formation.

Traders do not recommend to trade within the pattern and wait when the Diamond formation is confirmed. One of the reasons is that Diamond Top may look similar to the more common Head and Shoulders pattern (same for Diamond Bottom and Inverted Head and Shoulders), and it may cause early opening of positions. Diamond Tops and bottoms can also generally be comparable to double tops and bottoms, but they tend to have less distinctive highs and lows.

For both diamonds, the breakout potential and price target can be found by calculating a distance between the highest and lowest point in the Diamond formation and adding it to the breakdown point. On most occasions, the price can even go further after reaching the target.

The Diamond chart pattern is characterized by four trend lines — two support lines below and two resistance lines above which connect the most recent lows and highs.

Diamond Top formation begins when the price range broadens at the end of the uptrend until the price reaches its maximum. After that, the price range narrows, showing the decrease in volatility. It means the market participants are waiting for a further market reaction and accumulate their positions.

The second wave of participants enters the market to benefit from an established uptrend. But they cannot compete with the previous wave of buyers and simply buy in the place where the traders from the first wave begin to actively sell (close their positions that are already made a profit).

As a result, the price starts going down rapidly, it generates a kind of panic in the market, and the second wave of traders is also in a hurry to close positions. So the Diamond Top pattern is predominantly based on the greed of late market participants. 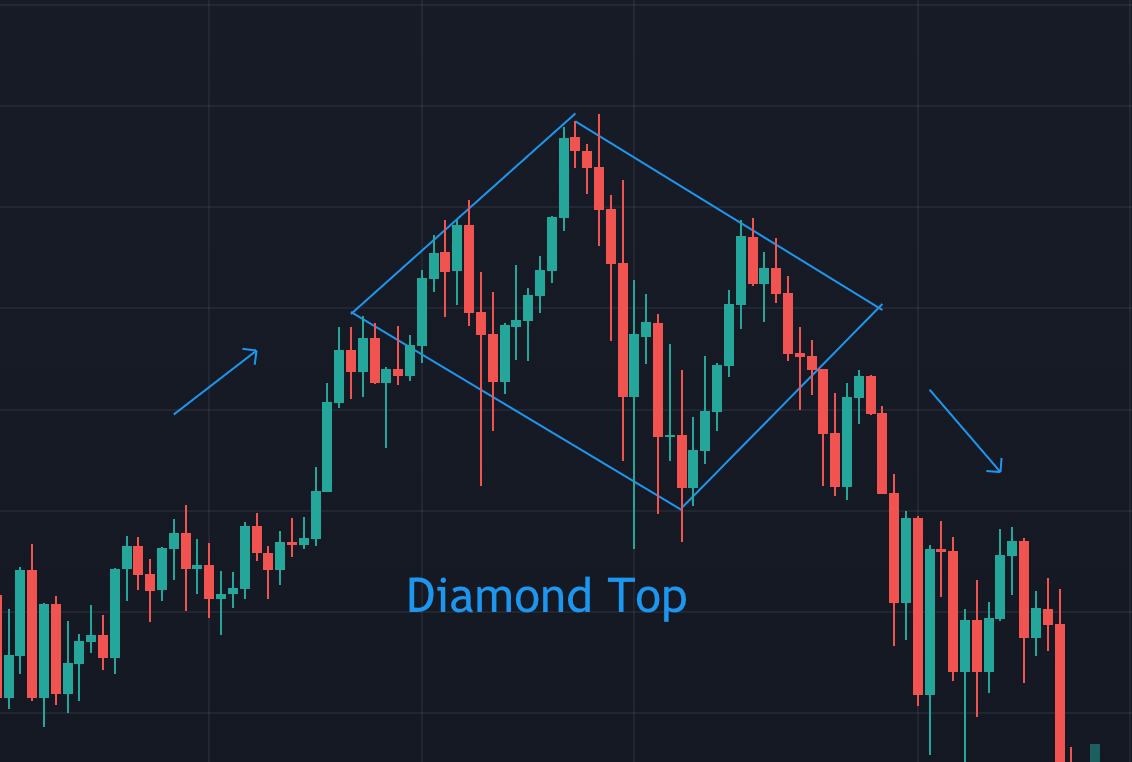 A similar situation occurs with Diamond Bottom but the market participants change places. At the end of the downtrend, the price starts moving sideways but in a broadened range. After that, a narrowing triangle is formed on the chart, representing volatility decline.

The second wave of market participants enters the market, while the first wave of sellers is fixing their profits. The price starts going up, the second wave is closing their short positions which accelerates the price surge. 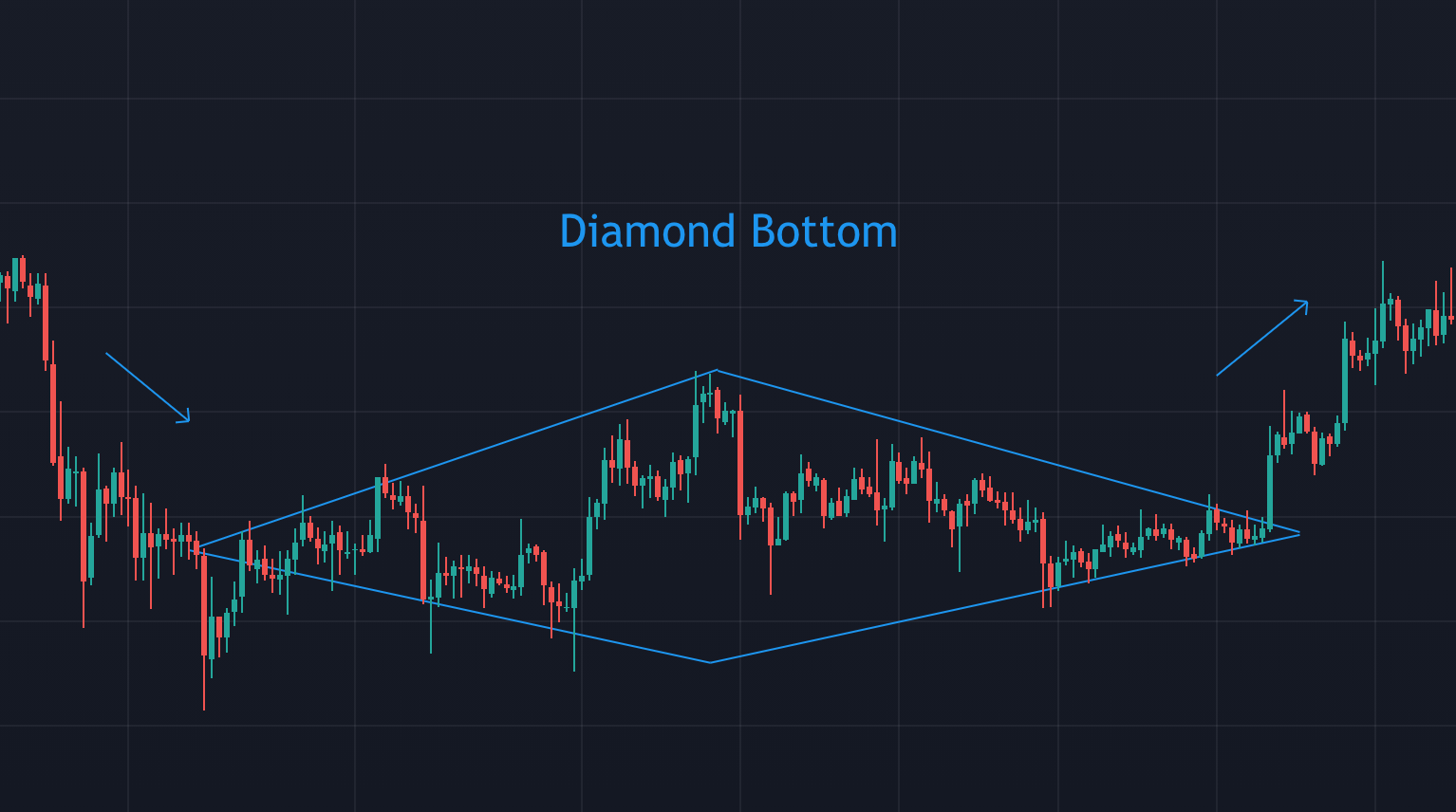